"This volume...should be in the libraries of every music school  and voice teacher."

One of the 30 art songs, Sound the Flute, sung by Nancy Williams, accompanied by Celius. Quicktime Movie.
For list of songs and audio samples:

"The substance of art song...the directness and storytelling function of folksong...worthy of concert performance at the highest level...wonderful vehicles for study."

MADONNAH OF THE EVENING FLOWERS      SOLO

To order any of these songs or volumes click here. 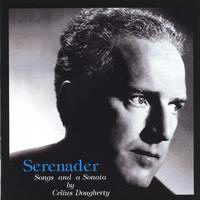 SErenader:
songs  & a sonata BY
CELIUS DOUGHERTY   (2003)
Available at iTunes.