"I love poetry.  I love what poetry suggests to me in the way of music.  The first thing that I wrote was a song.  When I was ten years old, I wrote a song." 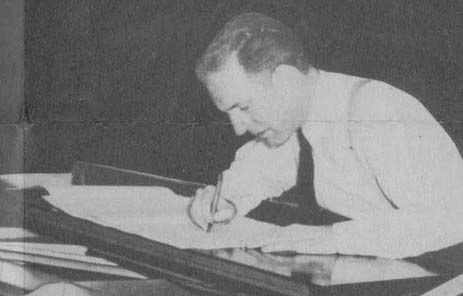 Celius Dougherty was born and lived his first 16 years in Glenwood, Minnesota.  His mother delivered the 1879 Carroll College valedictory speech in Latin, supervised music education in the public schools, played the organ at the Glenwood Congregational Church, directed its choir, organized seven of her eight children into a band and instructed her youngest in the art of piano accompaniment.  "I recall my mother most vividly at the kitchen sink because while she washed the dishes, she always studied a musical score, which was propped up on the sill in front of her."  His first public performance was at age ten, as her accompanist.

While at the University of Minnesota (1920-24), Dougherty studied piano and composition with Donald Ferguson, performed his own piano concerto with orchestra, won the Schubert Club's piano competition and frequently accompanied a UM voice faculty member, Gertrude Hull, who introduced him to his "mainstay" publisher, the G. Schirmer Company.  The first song Schirmer published Green Meadows (1925), was a setting of a poem that he wrote, dedicated to Miss Hull and, characteristically, attributed to "Anonymous."

Upon graduating magna cum laude from UM in 1924, Dougherty won scholarships at Juilliard Foundation to study piano with Josef Lhévinne and composition with Rubin Goldmark.  In New York, where he lived for nearly fifty years, he performed his piano Sonata in E Flat at Aeolian Hall  in 1925 and his Sonata for Violin and Piano in 1930.  As a result of the latter performance, he was given the privilege of working at the MacDowell Colony during the summers of 1931, 1932 and 1933 with artists who were "stimulating influences," including Thornton Wilder, Edgar G. Robinson, Ruth Draper and Padraic Colum.  One work composed during these years (1930-32) was "Damia," a one-act opera based on Petronius' Satyricon.

In New York, Dougherty became a sought-after accompanist, working with the leading recitalists of the 1920's, 30's and 40's:  Alexander Kipnis (left,) Eva Gauthier, Nina Kochetz, Igor Gorin, Florance Easton, Richard Crooks, Edward Johnson, Grete Stuckgold and, from 1927-46, Povla Frijsh (below.)  Recordings of their performing 27 songs together can be found on Povla Frijsh - the Complete Recordings (Pearl, Pavilion Records Ltd, Sparrows Green, Wadhurst, E. Sussex, England, 1994,) a double CD with a 9 page essay by Celius on their musical relationship.  "I played for her as I could not have possibly played for any other artist."  He also played for four  presidents:  Harding, Coolidge, Roosevelt and Eisenhower. In 1939 Dougherty formed a two-piano team with Vincenz Ruzicka, appearing in every state of the union and in Vienna with the Vienna Symphony in 1955.  The duo was noted for giving world premieres of important new works for two pianos:  Hindemith's Sonata for Two Pianos, Stravinsky's Sonata for Two Pianos, Berg's Suite from Lulu, Schoenberg's Variations on a Recitative.  Some of these were works for orchestra, which he arranged for two pianos.  Eleven were published.  Another was a sonata, which he arranged from nautical themes, Music from Seas and Ships , dedicated to his brother Ralph, who went down with the U.S.S. Arizona at Pearl Harbor.  This too was published and is featured on the CD, Serenader - Songs & a Sonata by Celius Dougherty.

Between 1948 and 1971 more than fifty songs were published.  By 1990 most were out of print.  In 2004 G. Schirmer published two volumes, with a total of 48 songs, including 11 that have never before been published - mostly in the folk genre, on which he focused in his later years.

For details on the song volumes and a recent recording go to: